The University continues progress on construction endeavors that include a new student health center, Alderman Library and Bond House renovations, an expansion of the University Hospital and Green Street recreational improvements.

Construction of the new student health center began in spring of 2019, with the goal of boosting the overall health and wellness of students through expanding programming and services. These services will be more comprehensive, focusing on preventative and wellness care in addition to treating those who are ill. The new building, located on the south end of Brandon Avenue, will be 169,000 square feet.

The project costs approximately $100 million and is partly funded by a $40 million gift from an anonymous donor and a $1 million gift from Board of Visitors member Robert Hardie and his wife, Molly Hardie. The Board of Visitors approved a $114 increase in the mandatory non-educational and general fee at its meeting Tuesday — $75 of which will go towards Student Health as part of a four-year plan to increase service offerings during the center’s expansion.

Since the project’s inception, the team working on the new student health center has had some “definite challenges,” according to Senior Project Manager Amy Eichenberger. Most of these challenges are due to mistakes in communication between site coordination and utility infrastructure, she said.

Specifically, moving utilities and other architectural elements to accommodate the building’s construction has been a challenge for Eichenberger since she and her team had to work with the city of Charlottesville in order to circumvent the closure of Monroe Lane near the University Hospital. Monroe Lane is currently closed due to construction work and is scheduled to reopen April 22.

The center is projected to be completed by June 30, a few months later than their previous expected completion date of March 31. Currently, the construction team is working on what they call the “skin” of the building, Eichenberger said, which consists of the masonry and electrical and mechanical aspects of the interior.

Now that the majority of the exterior is complete, she said, the team can focus on integrating the many departments of student health into the construction as a whole. These include medical services, CAPS, the Student Disability Access Center and the kinesiology department.

“So we have a lot of different things going on, but the primary goal is to serve the whole health of the student, meaning [that] the reason it’s a much larger building is because of expanded needs,” Eichenberger said. “We want to bring students in who aren’t just there just because they’re feeling bad. We want to bring students in there to learn about health and well being and how we can enhance that.”

One other goal of the design is to connect the interior with the surrounding landscape. In order to facilitate this, Eichenberger and the construction team are planning on incorporating much of the outdoor space around the larger windows to allow more light flow and views. Starting in fall 2021, the team will transform the empty parking lot on the east side of Monroe Lane into an outdoor park, Brian Williams, the project manager of the Brandon Avenue district projects said.

In regards to the rest of the Brandon Avenue construction projects, which include Bond House renovations and Green Street streetscape redesign, Williams said that they are “progressing well.”

“Bond House was fully occupied by August 2019 and the Democracy Lab fitout portion was completed in January 2021,” Williams said in an email to The Cavalier Daily. “The building is now fully open for its intended uses. The Brandon Avenue portion of the Green Street project was completed at the end of last year. The final portion of this project includes the construction of a park at the end of Monroe Lane adjacent to the south pond.”

The Democracy Lab, located on the first floor of Bond House, is used for research and teaching projects regarding democracies and their contemporary challenges and was tenanted out, he said. The space was completed this past winter and holds office spaces, conference rooms and classrooms.

On March 25, those on the team for the restoration of the University Chapel took the step to remove the scaffolding that surrounded the Chapel. Historic masons — who keep University buildings pristine using centuries-old traditional techniques — were repairing and restoring the mortar between sandstone blocks, which necessitated the use of scaffolding. When first constructing the academic village and Monticello, Thomas Jefferson used lime mortar — a building material that has since fallen out of fashion. Because modern mortars are not permeable, moisture is trapped within the bricks on buildings, so historic masons are responsible for replacing them with vapor-permeable lime mortar in order to preserve the buildings’ longevity.

Although Wayne Mays, senior construction and renovation services manager for trades for the University Chapel, was unavailable for comment in time for publication, he did confirm this step in an email to The Cavalier Daily on March 23.

During the Board of Visitors’ Finance Committee meeting on March 6, funding was approved toward two additional projects.

Lambeth Field Apartments renovations will start in May and continue through the summer of 2022 to resolve the negative pressure and humidity issues that have resulted from the outdated packaged terminal air conditioning units installed when the apartments were first built in the 1970s. The estimated project budget will be about $14.5 million.

Construction for the hotel and conference center — which will sit adjacent to the Emmet-Ivy parking garage — will begin in November 2021 and is projected to be completed by June 2024. The 223,000 square foot hotel and conference center, estimated to cost $130.5 million, will host University events and gatherings. The center is part of a larger design project proposed in 2016 that plans to redevelop 14.5 acres of land at the corner Emmet Street and Ivy Road in order to establish a link between North Grounds, Central Grounds and Art Grounds. Plans also include building a new School of Data Science.

The University Hospital also underwent an expansion of the Emergency Department, second-level surgical services suite and lower-level ancillary services, as well as the development of a six-story inpatient tower. Plans were drafted in 2011, and construction began in 2016. The project costs an estimated $394 million in total and is funded by bonds and medical center capital.

Chris Pouncy, senior project manager for the University Hospital expansion project, said that the project is expected to wrap up by this summer. All that’s left to complete is renovation of spaces in the floors of the hospital that needed to be refurbished for new uses.

Although the entire project will be near completed by this summer, the future of the expansion is still waiting on the construction of additional floors.

“There are three additional floors that have not been built out yet, but will be at some point in the future by the hospital — I don’t know exactly when,” Pouncey said.

However, the main challenge to construction was the onset of the COVID-19 pandemic, he said. Last April, the hospital had to modify the designated uses for each patient unit and rework the ventilation systems to prepare for the influx in cases in the Charlottesville area.

Overall, Pouncy said the project went “very smoothly” as the team was able to stay within their allotted budget and finish on time. 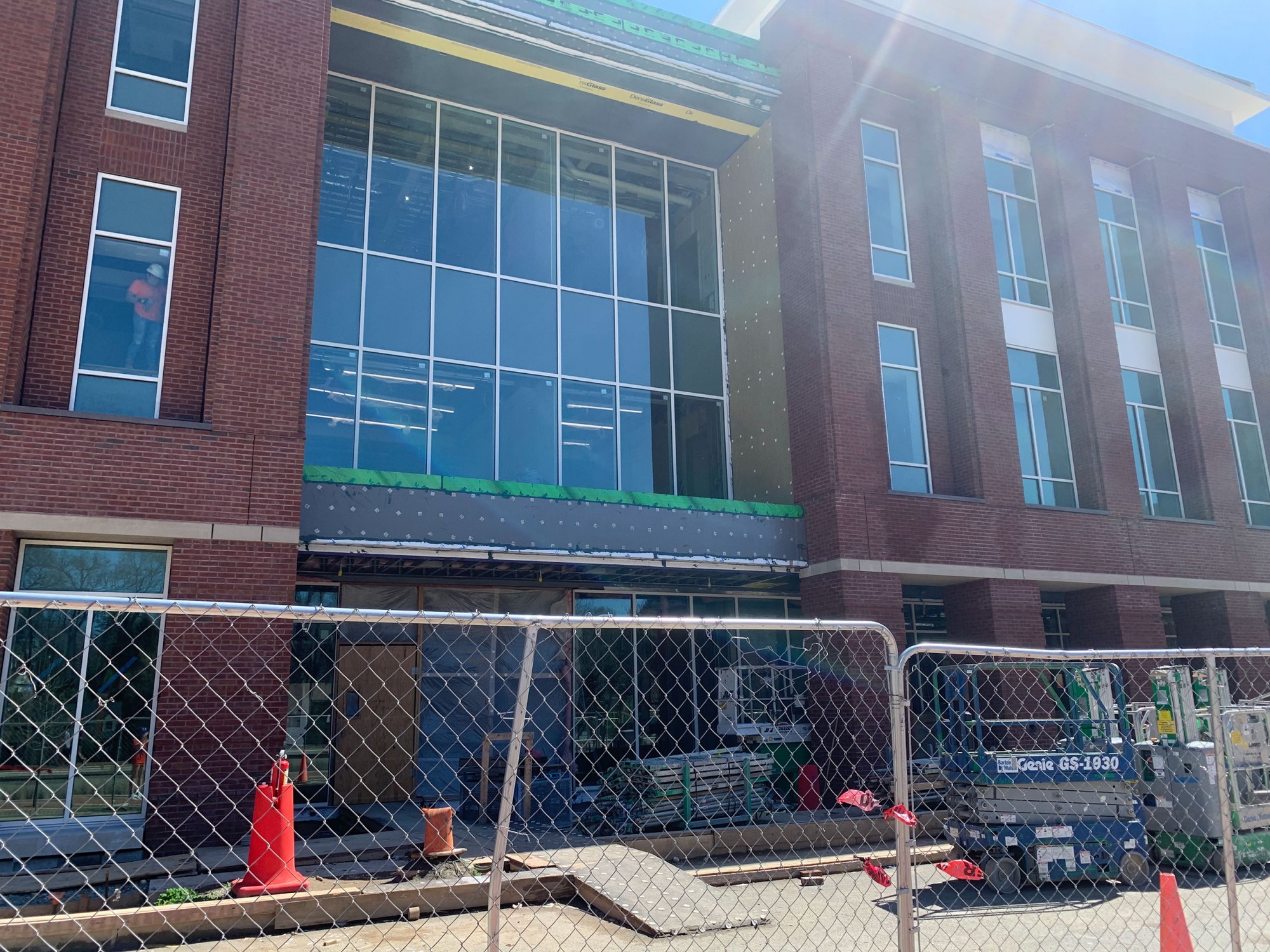 Alderman Library is also undergoing a renewal to increase safety and accessibility. The library closed in March 2020 and construction began in June 2020, with an expected completion date in spring 2023. The project, expected to cost approximately $111.7 million, will renovate 100,000 square feet of the building and build a 130,000 square foot addition on the footprint of the current stacks. Kit Meyer, senior project manager for the Alderman Library renewal, did not comment in time for publication. According to a construction update from February, current activities include demolition of the stacks, renewing the east and south exteriors and dismantling features of historic rooms.

Biden addresses stop of the U.S. war in Afghanistan